Back again – and for once, everything’s been fairly normal around here – or what passes for normal in this establishment, anyway 😉 The kittens are growing so fast! When we picked up Sal, he was 16 weeks old, and quite a well-built little lad for his age – and in the two weeks (or is it three weeks now? I fergit!) that we’ve had him, he’s almost reached adult size! Satai, who was barely 11 weeks old when we got him last Monday, was absolutely tiny in comparison! “They” do say that Bengals grow into “large to huge” cats, and although his paws don’t indicate how big he’ll eventually grow, i.e. he hasn’t got great big paws to “grow into”, he’s already close to Sal in size! He’s certainly the more dominant of the two, and I noticed this afternoon that he’s usurped Sal’s “top condominium” on the cat stand, where Sal used to curl up for his “après-midi” nap. Now it seems that Sal has decided that he much prefers having his “après-midi” nap on Daddy’s dressing gown, anyway! (perhaps because it magically and miraculously seems to fall into a comfy bed-like arrangement on the floor for him when Daddy takes it off every morning, hmm? 😉 )

But the two boys seem to be getting along pretty well – they play together until they wear themselves out, and when they’re not sleeping in the two places shown above, they cuddle together in Satai’s “cat cave”, or on Daddy’s dressing gown… 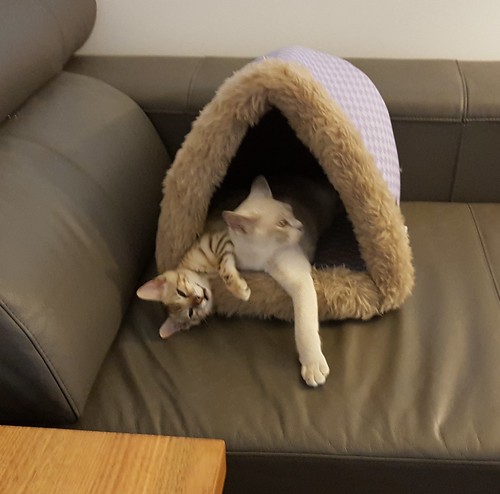 You can see how much Satai has grown in just a week! Maybe he will grow into a “large to huge” Bengal, after all!

Yesterday Julian and I took time out from our new Cat Entertaining enterprise (and apart from the job enjoyment factor, it really doesn’t pay terribly well, anyway! 😉 ) and played WoW. Imaan and Krankhaft went up another four levels, and (except for Krankhaft’s [lack of] motoring skills) once again, didn’t come even vaguely close to dying! Now, that’s the way we like to play! 🙂

The cleaning lady was here this morning – Sal really doesn’t like the sound of the vacuum cleaner (or the hairdryer!) and makes himself pretty much invisible while they’re being used, but little Satai was amazing! He stayed here in the Den while it was being vacuumed, and although he was quite wary at first, with Mummy sitting on the couch, just in case he needed rescuing, he started actually running after the vacuum, and pouncing on the hose! I thought he was very brave! 🙂 After K (the cleaning lady) had gone, we went out to get a few bits and pieces – as well as a couple of sturdy bowls for the boys – because we didn’t want to have to go out tomorrow, when I believe it’s going to be horribly hot. We went up to The Glen and had lunch at the Shingle Inn first, then went upstairs to see if Target still sold reasonably attractive fake plants, and nice sturdy cat bowls. I wanted some water-resistant plastic plants to put in a large blue and white ceramic vase, or urn, which I’ve placed for safekeeping in a corner of my extremely large shower, where little patty-paws won’t be able to send it flying – and I hate to say it, but it looks a little bit like a spittoon, sitting there empty! It now has a variety of plastic plants sitting in it and although the greenery still needs a bit more re-arrangement, at least it doesn’t look too much like a spittoon any more! And the reason we needed to buy new feeding bowls for Sal and Satai was that we’ve been using old and miss-matched crockery for their food and water, but they’re very breakable, and not terribly well balanced – one wrongly placed paw, or one over-exuberant leap for kitten-kind in the wrong direction, and food and water go everywhere! (we seem to be forever mopping up the spills!) So we ended up buying four (two for food, two for water) nice, strong, sturdy pet bowls, which they’ll get to try out at dinner time tonight.

I’ve just had to go and rescue Satai! He woke from his nap and realised that he didn’t know how to get down from his Penthouse! Everywhere he went to try and get down again, the floor looked just a bit too far away, and he was yelling for someone to get him down! now! And he was sure he was going to be late for dinner – or at the very least, starve to death in the next five seconds! Yanno, although the cat stand looks very “swish”, it’s not really terribly well designed – about the only way a little kitten can get down from the Penthouse is via a very narrow, angular section that has a dingle-dangle toy hanging from it. Sal’s bigger, and has no problem jumping all the way down, but Satai still has about a week’s growth to do before he’ll be able to do that – in the meantime, it’ll have to be “Descent by Mummy or Daddy”

I’m needed in the kitchen to help feed the boys… so I thought I might as well feed Auric and Dapple while Julian was busy dishing up the cat food… Sal eats in the kitchen, Satai eats in the Library, and they both get exactly the same food, and exactly the same amount – but they seem to have come to some sort of arrangement, where each of them only eats about half of their own dinner (or breakfast) then each of them races across to the other’s bowl, and guzzles down what the other has left for them! Cats are strange… The Dinner Relay race! 🙂  And now that Sal has finished eating he seems to have reclaimed his Penthouse suite! Better luck next time, Satai! 😉

Goodness knows what the scales will say tomorrow!

Food stuffs. Yesterday for lunch we had delicious sourdough sandwiches, with our favourite butter substitute, basil-pesto hummus, sandwich-sliced roast beef, some sort of sweet onion relish, sliced Tasty/Cheddar cheese, and lettuce – they were so yummy! 🙂 For dinner last night we had our usual omelets, with one main difference! 🙂 We had one of these in it!

Actually we had the one in the middle – Julian chopped it up and pre-fried it before adding it to the omelet, along with some green capsicum and some bacon… It’s sooo nice eating food you’ve grown yourself! 🙂 There was also diced tomato, and small squares of semi-melted Tasty/Cheddar cheese in it too. For dessert I had an extremely nice Calypso Mango, and a CHOBANI strawberry yoghurt, which was rather nice! (I don’t usually like strawberry yoghurts, but I’d never had a CHOBANI strawberry yoghurt before, so this one was a bit of a surprise because it was really quite nice!) Today for lunch at the Shingle Inn, I had all my usual – a long black (coffee) with a little side-jug of skinny milk, my usual BLT on sourdough bread, and another chocolate caramel slice. It was nice, but they’ve gone and changed it! 😦 The chocolate caramel slices used to be longish and skinny-ish, with a biscuit-crumb base (which was delicious!) a good, thick spread of caramel “goo”, and a nice, thick slab of darkish milk chocolate on top. Now, the slice is shorter but slightly broader, the base is made from a yukky nondescript pastry 😦 the caramel “goo” is not as thick and “firm” as it used to be but is “sloppier” and more sticky than gooey, and the chocolate topping isn’t as thick. It was alright, but if they don’t have their usual sort of caramel slice back next time we go there, I’ll have something else instead 😦 Tonight we’re having pan-fried steak, sugar-snap peas – just a few inferior ones bought from the supermarket, our usual half a tomato, and chips. For dessert I’m having a brown Nashi pear, and an Apple Le Rice.

I found a way to stop the cats drinking my glasses of water! While in the supermarket this afternoon, we bought a packet of those “coffee to go” cups with the little plastic sipper lids – they should work alright – as long as Satai doesn’t realise the fact that the lids look exactly the same as his newest most favourite toy! Yes, in unpacking them Julian managed to drop one of the lids on the floor, which made a rattly noise, so he pounced on it. It skittered away from him, clattering along the floor, and the game was afoot! he’s still playing with it! So is Sal… Like all kids, the simplest, cheapest, easiest to make or throw together toys are always their favourites! 🙂 (we have yet to introduce them to…. boxes! 😆 ) Anyway, that just about brings you all up to date with all our comings and goings for the past two days, so I reckon that’s about “it” from me for tonight! Do drop in again tomorrow night to find out what we’ve been up to, catch up on all the cat antics, fishy frolics, and my rather woeful attempts at amateur phonetography (that’s a new word wot I just invented! I reckon it’s cool, cos it means what it sounds like!) So until tomorrow night, please do your level best to bee good, remember that you never know what you have until you clean your room, and don’t forget to look after yourselves, to always drive carefully, and to keep cool – or warm – if you plan on visiting Alaska… but most importantly, please remember to stay safe! 🙂 ciao, all! 🙂

If you're that interested in finding out about me, you can read all about me on my "About me" page! ;) View all posts by winterthyme

all my old stuff…

pick a day… any day…

What are you all doing, sitting there still reading this? You should be out walking the dog, reading a good book, washing the dishes, going shopping, helping your mother or wife, or significant other!) or *talking* to friends for a change, instead of texting them! Go on, off you go! See you all tomorrow night! ;-)
%d bloggers like this:
%d bloggers like this: