Back again, having spent nearly all day in the lounge room, “supervising” the kittens!(read: making sure no blood got spilt! 😉 ) Sal is still “very put out” about his new brother, whom we are calling “Satai” at the moment (this is likely to be temporary, so don’t be surprised if I suddenly start calling him something else!) and he (Sal) is going to a very great deal of effort to make us understand this fact – hissing at Satai, growling, threatening to pounce (you know, the complete “hunter’s crouch” bit that cats do when they’re about to spring on a bird, or a mouse – complete with a full botty wiggle!)  etc., etc., and so forth. In other words, Sal is being a complete schmuck about it… or was being…

Satai, bless his little heart, has been quite unphased by Sal’s posturing and disapproval, and has just carried on as though Sal was being the friendliest cat in the neighbourhood – and, I might add, completely confusing his older brother! If Sal was expecting little Satai to be intimidated or frightened by all his hissing and growling – the entire object of his threats – well, he was sorely mistaken… and not a little confused:

Sal “hiss, growl, glower! don’t come near me, you nasty little spotted interloper!”
Satai “hello Sal, (bounce, bounce, bounce) what shall we play today? Hey! Wanna play chasey? (runs around in a circle chasing his own tail) C’mon, you can chase me!” [runs a short distance away, sees that Sal’s not chasing him, runs back again] “C’mon! chase me!”
Sal reluctantly runs around the corner after Satai
Satai gleefully shouts “You’re it now, I’ll chase you!”
Sal pelts around the corner with little Satai in hot pursuit

Anyway, they’re now both plum-tuckered out from all this “chase and be chased” exercise – Satai is either under the coffee table in the lounge room (his most favourite spot in the whole house!) or under the end table in the Library (his second most favourite spot in the whole house!) and Sal is sound asleep, curled up on Daddy’s plush grey velour dressing gown, which somehow “slipped to the floor”, all of its own accord! 😉

Satai is getting to know both his name, and us. We were a little concerned on the way home from Mt. Cottrell because he wouldn’t stop meowing all the time – we thought he was unhappy, and crying – but apparently that’s not the case! We’ve come to the conclusion that he’s just a chatterbox, as he still meows almost non-stop, even when he’s playing and obviously happy! Actually, it’s not so much a “meow”, as a “chirrup”, or a sort-of a cross between a meow and a chirp! I’ve read many stories about cheetahs and their cubs, and how the cubs make a sort of chirping noise to communicate with their mother and their siblings – well, I think this is what Satai’s doing – chirping! I think the only times he’s ever completely silent is either when he’s asleep, or got a mouthful of toy (or food)! We can now pick him up, if we don’t make sudden, quick moves, and he’s quite happy to be picked up and cuddled – but if you move towards him too quickly, he runs off – not far, just out of reach – where he sits down again and looks at you as if to say “What are you going to do now, hmm?”

How did we get to the name “Satai”? Well, I had a whole list of names picked out, which I managed to whittle down to three. We tried Nebi, and we tried Kiraat – which I ended up thinking was too long, and yesterday we tried Seti – which worked, but we felt was too similar to “Sal”, or “Sally” (Salai) and that the two of them – not to mention the two of us – might get confused. Once upon a time, in a galaxy far, far away, there was a TV show called “Babylon 5” – one of the main characters was a member their world’s governing body, called The Grey Council – the equivalent of the US Senate, I suppose you could call it – and they were addressed by the title “Satai”, which would probably be the same as the term “Senator” – so f’rinstance, “Satai Winter” would be like saying “Senator Winter”, if you see what I mean… So we tried “Satai” on the kitten, and he seemed to like it – when I patted my knee and called “Satai”, he came running over, anyway… But, “Satai”, “Seti”, “Sal” and “Sally” are all pretty similar – which is why I said in the beginning that the current name of “Satai” could very well be temporary. We’ll see! 🙂

Update! Julian couldn’t find Satai, so I told him how to call him – calling out “meow” in a high, squeaky voice always seems to make him poke his head out from wherever he’s hiding – this time he’d secreted himself inside the end table drawer, and was most annoyed when Julian found him there! But he sat quite happily on the couch on Julian’s knee for a few minutes, even when Sal jumped up onto the couch with them! The three of them were just in here, and not only did Satai let us handle him without protest, but once back on the ground, he walked over to Sal and they touched noses – twice – and then Sal remembered that he was supposed to be hating this little spotted interloper, and gave a somewhat half-hearted hiss, which Satai totally ignored and pranced off to chase his own tail again!

So, I suppose you all want to see what this charming little Bengal kitten looks like! Well, for once I have photos! 🙂 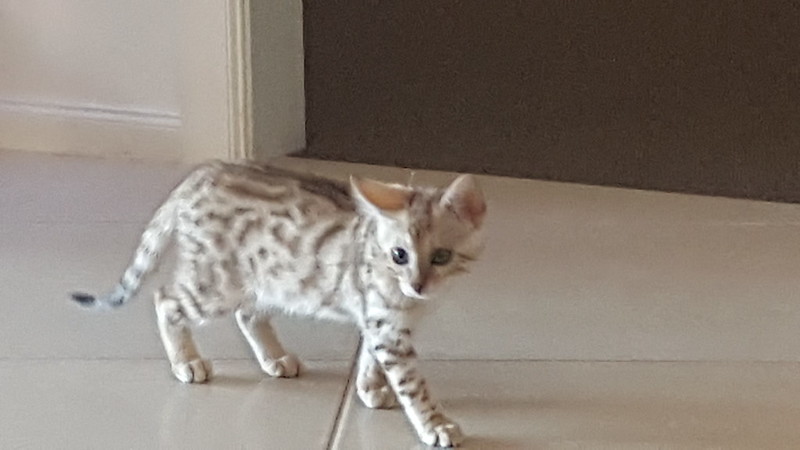 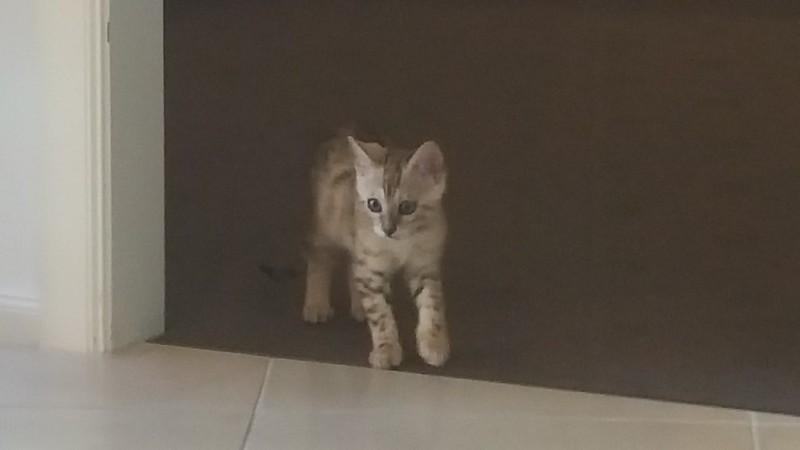 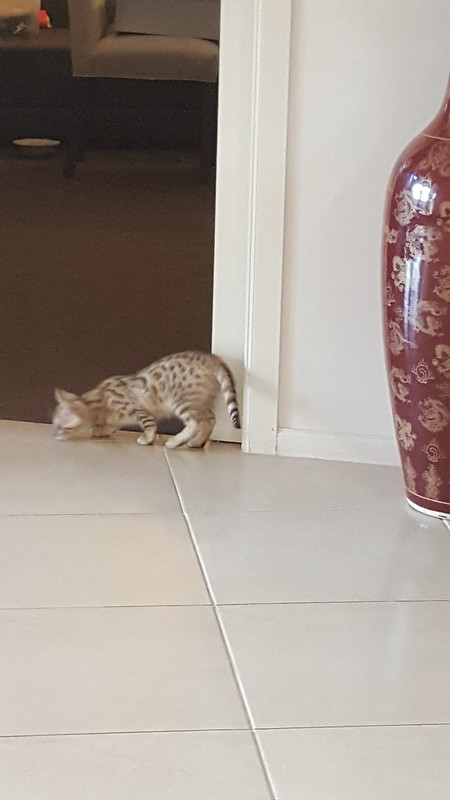 So apart from Sean coming over this morning to do my hair, that’s pretty much what I’ve been doing all day, “supervising” the children while Julian went out to pick up the dry cleaning and do some shopping – and of course, yesterday was almost completely taken up with our trip out to Mt. Cottrell to get him! We did have an “un-cat” day on Sunday, when we played WoW, with Imaan and Krankhaft. Once again, we went up lots of levels (at least four or five, from memory!) and didn’t even come close to dying once! It was a very good day, and we’re hoping that we might get a chance to play a bit more before next Sunday! These days I hardly seem to get a look in at WoW, as I won’t even start playing if I know I’m going to have less than two hours worth of playing time before I either have to do something else, or be somewhere else… We might be able to get a couple of hours in tomorrow, if we’re lucky… Thursday’s out, as my very favourite eldest daughter will be over… and it’s her Birthday, so if she’s very lucky, we might even take her out for lunch somewhere! 😉

Weigh-in this morning. My weight has been steadily climbing – and at the end of the month I go back on those bloody (‘scuse the French!) little fluid loving and retaining pills for ten days – “and that’ll be another full kilogram of fat and fluid, thank you ma’am!” In the sort of weather we’ve been having, where heat – and especially humidity – make my feet and fingers swell like balloons (which is yet another reason why I hate summer!) the last thing I need is something else to make me retain even more fluid! Anyway, ’tis only going to be until after April 16th (Easter Sunday) because then I’ll be Birthday and Celebration-free, and I intend to go back onto Optifast for a couple of months… This morning I weighed-in at a disgustingly fat 72.0 kg!

Food stuffs. Today for lunch we had Baker’s Delight Bring Home food – it’s very nice, the two halves of different savoury rolls, and the – usually fruit and white chocolate – chocolate and choc-chip scones, which while totally delicious, are really not very good things to eat when you’re trying to watch your weight! (note to Julian – why don’t you make another of those delicious fruit loaves? Two slices, lightly buttered, for lunch would probably be better for both of us – or even a sandwich made from your yummy home-made sourdough bread…) Tonight we’re having grilled steak, with par-boiled (not steamed) sugar-snap peas, sautéed in lemon flavoured olive oil, our usual half a tomato, and chips, of which I’m only having six… I must go out with Julian tomorrow, as I only have one piece of fruit left! A brown Nashi pear, and that’s it! I want to go back to the fruit market at Bushy Park and get some more cherries and pears, and to see what else looks interesting. So, a brown Nashi pear tonight, and a CHOBANI yoghurt, if we have any left – otherwise I’ll have an Apple Le Rice.

And that brings me back to tomorrow – Julian wants to go out to get some magnets – all our windows have Holland Blinds with little metal chains for raising and lowering them, and of course, the kittens have “found” them! Not only are they likely to break them, but they’re also likely to strangle themselves in them, so to keep them out of kitten reach, we either have to cut chunks out of them in order to shorten them – which will mean that they’ll be out of my reach too 😡 or hitch them up out of the kitten’s reach (which will also mean that they’ll be out of my reach, but if it keeps the kittens safe, I don’t mind…) Because the chains are made from metal, they’ll stick to magnets (Julian experimented with a magnetic lapel clip!) so he plans to buy enough magnets that he can affix to the window jamb, to hold the chains out of kitten-harm’s way…. so…. if I go with him, I can get him to stop at the Bushy Park fruit and vegetable market so that I can get some more fruit – two problems solved/taken care of, in the one trip! 🙂 So the whole tribe of us, Julian, me, Sal, Satai, Auric and Dapple are all basking in the warm glow of bonhomie at the moment – the two kittens seem to be adjusting to eachother, and Satai seems to be adjusting to us giant big hoomans – Auric and Dapple will be having their Fish House cleaned tomorrow – and that’s really about “it” from me for tonight! Do drop in again tomorrow night to see if I did get some more interesting fruit, if Julian got his magnets, and cleaned the Fish House, and whether Sal and Satai are still on speaking terms! 😉 Until then however, do try to bee good, don’t forget that if you turn your face to the sun, the shadows fall behind you, and remember to look after yourselves, to keep cool – or warm – depending on your personal preference, and to always drive carefully… but most importantly – please, remember to stay safe! 🙂 ciao, all! 🙂

If you're that interested in finding out about me, you can read all about me on my "About me" page! ;) View all posts by winterthyme

all my old stuff…

pick a day… any day…

What are you all doing, sitting there still reading this? You should be out walking the dog, reading a good book, washing the dishes, going shopping, helping your mother or wife, or significant other!) or *talking* to friends for a change, instead of texting them! Go on, off you go! See you all tomorrow night! ;-)
%d bloggers like this:
%d bloggers like this: